Columbian necktie – Got the Jimmy Legs This is the only photo I took of our vacation

I took an actual vacation from work, but now I am back and I am trying to determine if the time off has made any difference. So far today it seems that all the work I left before is still here, plus a bunch of stupid crap that has piled up in the mean time. I don't mind it so much since I can pull the "hey, I just got back from vacation and I am swamped" for the next week or so. I suppose the fact that I don't mind this means the vacation succeeded in relaxing me adequately. I blew off just enough steam to once again resume my cog-in-the-wheel status.

In two weeks my office moves downtown, which would be interesting if it didn't mean I will have to start dressing up for work. I think I have to start wearing ties and shirts that tuck in. Does anyone know if they make pre-tied neckties that can be buttoned in the back? Not a clip-on, which is pretty obvious, this would be something that would look like a real tie from the front but be easy to attach in the back (the clasp would be covered by the collar). I looked for this but I couldn't really find any; doesn't this seem odd? Why do people waste valuable time tying their ties every single day? I thought about just loosening the knot so I could put it back on, but this tends to rumple the tie. Is this a million-dollar idea the corporate world has been waiting for? 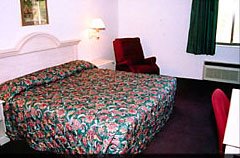 Anyway, I'm back. Our vacation consisted of a short jaunt to the Greater Cleveland Area, to visit some people up there and generally not do anything. The highlight of the trip was holing up in the lovely Super 8 motel, eating junk food and watching cable television. Of course after 3 days of this, we were both totally sick of junk food and agreed that even with 60 channels there was absolutely nothing to watch (although we could almost get by on just Bravo and Animal Planet). We hung out with my sister's family and finally got to see lifelong friend James' new house. We hit up Corky & Lenny's, Tommy's Diner (soy milkshakes!), Aladdin's (best baba ever), and drank free Starbucks the entire time using the gift cards our bosses had given us last Christmas. We ran through the endless aisles of Giant Eagle and the non-crowded Whole Foods, went to the mall and bought some clothes, and remembered to swing by Big Fun on the way to the airport to buy some crap (actually I bought some tin crickets to help train the cats to do my bidding). In short, we lived like Ohioans, if only for a short time.

There is something to be said for sequestering yourself away from your life. I kind of scoffed at that sort of thing in the past, but the older you get, the more necessary it may be. Even if we hadn't gone to Cleveland, we could have booked a room at some local fleabag motel to get out of our house for a couple days. The remainder of our vacation was spent at home, and although we got a lot of work done on the house, that's exactly the problem: you can't sit at home and do nothing. I've tried before but sooner or later I find myself weeding, or fixing something, or god forbid, cleaning. In that Super 8 with the uncomfortable headboard and nonexistent maid service, we were forced to actually do nothing, which is harder than it sounds.

Anyway, when we returned to Brooklyn we set about out our tasks, which included hitting the newish Ikea. We've been in our house for almost 2 years and we still haven't bought any furniture or anything. My night stand is a storage chest; Jeannie's is a chair. Our couch (a gift from our pal Sean M, who has basically outfitted our entire home with his hand-me-downs) once was an elegant fixture from the 50's, but it has been used to the point that it cuts off leg circulation when you sit on it for a while. I don't know that I ever had any political issue with the opening of the Brooklyn Ikea, but if I did, I forgot all about it when I realized we could outfit most of the house for less than one couch from Room and Board.

Ikea was nice enough, we picked out tons of stuff, then came home and bought it online. Annoyingly, a few items were not available online, so we'll still have to go back there at some point. The shipping costs were also outrageous, but we still came in several hundred bucks below my intended ceiling. Who knows when we actually will get the stuff, this doesn't seem to be their strong point.

This entry was written by Jimmy Legs, posted on September 10, 2008 at 10:23 am, filed under Cleveland, Good Stuff, Job, Motel, Ohio, Vacation. Bookmark the permalink. Follow any comments here with the RSS feed for this post. Both comments and trackbacks are currently closed.